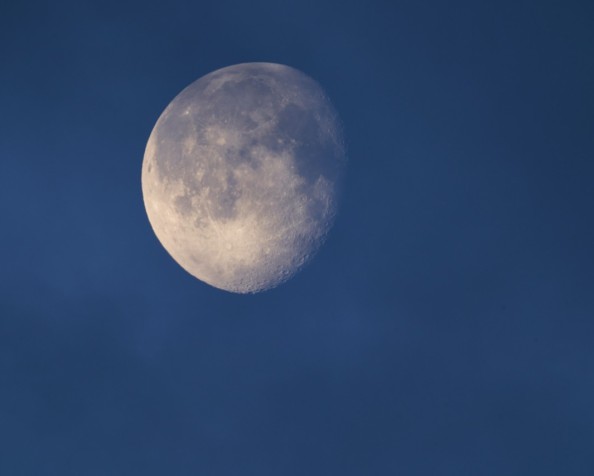 Photo by Ingo Doerrie on Unsplash

It is early in the morning, crisp spring air cools the cheeks and sends earlobes numb. On the canvas of a beautiful blue sky is painted the moon, still risen and large enough to see it’s sculptured surface with the naked eye.

Against its pale blue background, the dark craters on the surface blend with their grey colour and invite thoughts of what it would be like to visit, a nice place to go, colourful, pleasant, calm.

And then comes the reality of what it is actually like out there. A massive rock orbiting in the blackness of space where no human could survive for more than a minute without the aid of technology.

An orange satellite sitting in a black galaxy.

There’s something about the human condition that means we always see an image rather than reality. I guarantee that most people who look at that moon in its picturesque blue backdrop see an invite to go there. They feel like they’ve been given a ticket on the first rocket ship to carry tourists to such an extraordinary place.

Not in our grandchildren’s lifetime, will we be able to do anything serious in space. We will generate a lot of space junk flying around in orbit above us. And various companies and countries will try to snaffle some resources or make money on the back of the curious. But the reality is the physics and the simple scale of the universe make even visiting our solar system a task beyond our current technologies and the laws of physics as we understand them.

Unless someone can crack moving faster than the speed of light, then we are destined to stay here on our own in this tiny corner of the universe, in our own blip in time.

This should be sobering. Then it should be a delight to recognize our uniqueness.

Sure, there are other life forms out there. Enjoying or not their own blip of existence. But the physics of it all means that we won’t see them and they won’t see us.

And yet the reality is that we are no more suited to be in outer space than we are to dominate planet earth. I know it says in the bible that we should have dominion but that is just some self-assurance. The truth may be closer to our survival chances on the moon.

On earth, we change everything to our own devices for our own purposes and needs. And have done for centuries. We’ve been so good at it that the planet is barely recognizable. The moon has seen the changes on the blue planet and wonders what’s going on down there?

At the moment it seems that what is going on is aggrandisement through a focus on self.

And, as written many times on this blog, there are very sensible and logical evolutionary reasons why that is a default position. Our biology is to make more and we are extremely good at it.

What we fail to realize is how hard it would be to change that biology. So that our blip in time in this tiny corner of the universe would be anything more than a path to our own mutual destruction. We would have to go against our nature in order to persist. Resources must be shared beyond our kin. We would have to restore and rehabilitate land that we had previously pilfered for its benefits.

And without other people onboard, the system breaks down into all the old patterns. It’s an ‘in this together’ kind of game. We either all come and collectively understand the consequences of failure to acknowledge each other and work together or we go extinct.

And I know what you will say. Many people have said this many times before. But we are still here, still creating technologies to keep our supply chains and systems moving — ever bigger, ever better.

We probably have a few decades, maybe even a century or two left to keep doing that to keep on that track. Malthus, Ehrlich and others who prophesied doom from overpopulation are not yet prophets. But they will be. There will be a crash. It will be ugly and whether or not we come out the other side in any sort of shape at all is determined by what we do now.

If we do nothing the crash will be deep and very painful. And what comes out of the other end will be a handful of unfortunate folks scrambling for what’s left. If we behave ourselves and begin to cooperate and talk and identify the things that really matter then there is a chance that the crash can be managed. A softer landing if you like. And what’s left behind could be in better shape.

I’ve thought about this a lot in recent weeks. Given the development of a new project around food, ecology and diet — sustainably FED — and fictional writing of climbing to the meet and the conversations of Paul Sorol. Reflecting on what our chances of getting through really are.

Locally the chances are good.

In a crisis, people do help each other. We’ve talked about that on this blog many times before.

But once the crisis is over and the local situation calms that helping hand does tend to fade away.

Keeping that crisis momentum going is also not what you want to do. Nobody wants to live with heightened alertness the whole time unless that happens to be your psychology.

Moving towards something that is worth keeping is the key. That involves our awareness and is the challenging part. It’s not that we don’t have empathy. Not that we don’t have the ability to go operate clearly we do. But just not enough for long enough to see us through to a soft landing.

I do not have an answer. It would be good to find one but I simply don’t have one at this point. As to how we would do that.

And my apologies for another pessimistic post. But hopefully, you can see the kernels of optimism.

There’s still a chance even at this late hour for humanity to not just turn things around but to make the future much brighter than it seems that present.

Right now we’re heading for some dark times. Unpleasant politics, leadership that is either inept or not leadership at all, but authoritarianism by any other name.

A pandemic continues to cause havoc with everything around the world, changing what we thought was our normal lives.

But it’s this time of apparent darkness that it is possible to see the moon at its brightest against that blue background and to think of it as a place worth visiting.

Please share to help us all reach for the stars and find the moon.