In recent weeks I have been running around more than usual talking to people who wear suits to work. They have nice offices and meeting rooms with coffee to order brought in by waiters with Kevin on their name badge. This is all very nice if a little challenging for your caffeine intake.

The discussions have been about green bonds, a newish variant on a familiar form of fixed income investment. Along with talk of debt, security, risk and annuities, a conundrum that befuddled the starched white-collar folk was how to define green — often put as succinctly as the simple question, ‘what is green?’

Pause for a moment to ponder this situation. Here we have the business end of town asking a question that they have always managed to ignore. The very question that environmental advocates have consumed careers trying to get them to even think about asking.

There was even the suggestion that failure to answer the question might slow the process of green bond origination. Suddenly the health of the environment was important…

But there it was, the question they wanted answered was ‘what is green?’

Regular Alloporus readers will know that green is not my favourite colour — pastilles are more me. Green is a colour waved to claim goodness and the moral high ground and a banner to deny and repel a host of things that some people find useful — the mahogany table in the meeting room for example.

But my fundamental problem is that green is an ‘against’ colour.

All this ‘against’ naturally comes with the requirement of being ‘for’ anything that is green. You have to be ‘for’ saving the koala, forests and anything indigenous. Habitat corridors are good green things and so we have to have them. The fact that evidence for the green credentials of corridors is equivocal should just be ignored.

Before I am trolled into submission for my heresy, let it be known that there is green in me beyond my many lime green t-shirts. I try to reduce, reuse and recycle and would prefer to see better use and protection of the environment.

And having been lucky enough to see them in the wild I know it would be gut-wrenchingly tragic for the black rhino to go extinct in my lifetime as seems increasingly likely. My science training reminds me that the loss of any species is irreversible. I even felt a little nauseous at some Youtube footage of bow hunting that turned up in a review piece.

Except that all this has nothing to do with the question of ‘what is green’ asked over coffee on the 14th floor. That was asked with a very different thought in mind. The question was about how to show the activity could deliver more than the required financial benefit.

On any number of levels that was weird.

The answer needed a list of benefits and ways to record and report them. This is actually how business people think. They count and they account. It would not be enough to say that green is against these things and for some others.

Of course business has no real interest in green. They are looking for the cheapest finance with the fewest strings attached. If one of those strings is green, so be it.

I wonder if the ‘against’ colour can handle that.

Other Alloporus posts on green…

Green has moved on

The greens need a new name 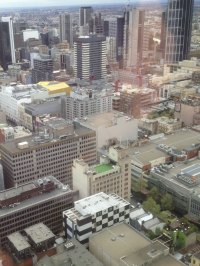 In the last month I have been exploring decision making in business. It’s a long story that spins around one core assumption that I needed to test. The assumption is this.

If evidence is available people will use it to help them make smart choices.

Now I always thought that before any serious decision was made the brain recalled and sifted its available knowledge relevant to the decision. This coffee is hot. It must be because I just saw the barista pour steaming milk into it so I will sip it to avoid burning my tongue.

Other decisions rely on less categorical evidence. My superannuation scheme allows me to choose between steady and more risky but high-yield investments that have something to do with the mixture of stocks and bonds in my portfolio. I choose the steady option because I remember seeing a graph showing share price crashes occur often enough for another big one to happen before I retire.

Sipping coffee or avoiding risky stocks are evidence-based decisions even if the amount and quality of the evidence used is vastly different.

As a professional scientist evidence is my currency. Training and experience have taught me the skills to sift data into facts and to understand how facts can become evidence. And I always hope that the evidence is articulated in forms that influence decisions. This is a powerful paradigm that still underpins my consulting practice alloporus environmental.

It always made perfect sense to believe that if the human brain makes decisions based on facts, then if evidence were available people would use it.

Oh the bliss of naivety. If only it were possible to be in such a state indefinitely. Life would be so much easier.

Then I began to ask business types this question.

If evidence were available to help decision-making, would you use it?

Mumbling ensued. In just a handful of meetings it was clear that the real answer was no. There were claims of course and even the occasional example of actuarial prediction or due diligence report, but in reality decisions are gut feel things.

At best evidence is gathered in support of a decision already made.

It has been quite a shock to find a core assumption that is a given for a scientist is at best bent and at worst ignored in other walks of life, even where evidence is needed.

Then I paused and realised where evidence comes from for the majority of people who do not have the time or inclination to peruse academic tomes. It comes from their experience; usually their immediate experience that is still in the front of the mind.

And a good deal of this ‘evidence’ is incomplete.

What we see in the workplace or told by the boss or browse on the web is not evidence in the scientific sense. Even if it involves data it has no context to determine inference. In short we decide on a whim. What our guts tells us.

If this is true it begs some very interesting questions.

Why doesn’t the system fall over if we are relying on the [mostly] corpulent guts of [mostly] male business managers?

Why do we have evidence at all if nobody uses it?

Would decisions be better if they were made analytically?