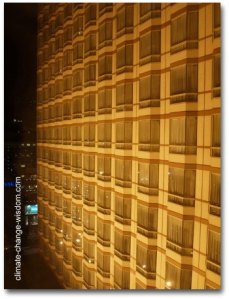 Peter Gleick of the Pacific Institute as quoted by Thomas L. Friedman in his fascinating book “Hot, flat and crowded”

What would happen if there were ubiquitous, cheap, energy?

Likely we would give in to our insatiable desire for stuff and just buy and buy and buy. Our houses would become cluttered with any amount of clothing we couldn’t possibly wear out, gadgets that waste more time than they save, and furniture we only sit on once.

Our stomachs would grow on the copious quantities of food in the fridge.

And the landfills will expand to cope with all the old stuff we (eventually) threw out.

All this would be possible because energy is a big cost to manufacturing and primary production. Make it cheap and available everywhere and no end of opportunities emerge for the production of salable goods.

The only thing holding back commerce would be the availability and cost of raw materials.

This outcome of ubiquitous, cheap, energy we might call the ‘no impulse control’ scenario. Unfortunately it aligns closely with the economic paradigm of growth. In order to keep economies growing we have to create and sell more stuff.

So cheap energy would simply fuel the runaway train.

Now if this energy were dirty in some way, either for the climate or as a more tractable pollutant that created smog or contaminated waterways and land, then there would inevitably be a regulatory check on its consumption. At some point public health concerns will slow the exploitation of a dirty resource. Sometimes environmental concerns can be enough to curb excess.

But what if it was clean? The clean, ubiquitous and cheap energy nirvana that is common in sci-fi novels. There would be nothing to stop rampant capitalism, especially if by ‘clean’ we meant next to no environmental impact, greenhouse or otherwise.

And this may indeed be a problem. Supply of other resources and skills would curtail some of the excess – there is already a global shortage of steel and skilled developers for large-scale infrastructure projects – but the social and economic ills of fast growth would still be a risk.

“But in the short run our problem is not having enough clean energy…” because right now we have cheap energy only it’s dirty and running out. We need the clean stuff and soon.

At the moment we have all the growth problems plus the dirty consequences. So we should be mobilizing our smarts, capital and entrepreneurial talent to find a secure, clean and scalable energy source.

Instead we invest yet more in fossil fuels.